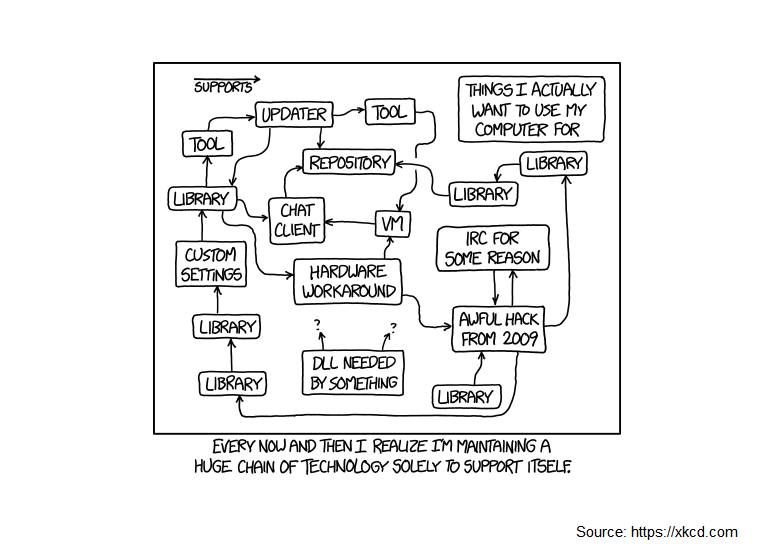 Software libraries provide ready-to-use functionality that you can import into your software projects with ease. With today's package managers it's easier than ever to reuse code. However, as the number of dependencies grows in a project, there is an increasing amount of risk related to the dependencies. The more dependencies you have, the more your project depends on other people - their capability and will of keeping the dependency stable and secure to use.

Let's do a thought experiment. Say you have a project that has 100 dependencies. You are 99% confident that each dependency is safe and stable to use. At a glance it seems that your project should be reasonable stable with this assumption.

I'm not saying we shouldn't use dependencies.

But I do want to say that we should use dependencies with consideration.

As you probably noted, I've gravitated towards the less is more side of the dependency-use-spectrum. This is probably a side-effect of having worked on a long-lived product line (almost 19 years since I first touched the code base, still working on the Nth generation of the same product). In a long-lived product you want to consider carefully which dependencies you want to be updating or refactoring out in the coming years. Through the years I've been through a few cases of purchasing a new version of the dependency to match the IDE upgrade, refactoring out the dependencies, or switching one dependency to another, or cutting out some (non-critical) functionality due to lack of upgrade compatibility in some dependency.

In the later years I've also gotten the chance to enjoy today's abundance of open source libraries, and play catch-me-if-you-can with library updates, fixing issues that broke when we updated the libraries. In some cases our code has been silently broken until an update exposed the broken code, in some cases the dependency update required updating our code to match a new version. Anyway, this reminds me that, while I value the sheer number of software libraries available today, and also use quite a few of them, I'm still at the less is more end of the spectrum.

Dependencies are usually a good thing when they solve a big problem for you. For solving small problems, I'd like to quote Rob Pike's Go proverbs:

"A little copying is better than a little dependency".